Signup for news and special offers!

On Kingdoms and Crowns 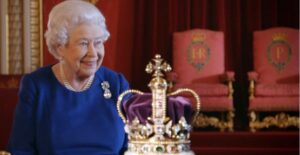 In the United States, our freedom-loving feet are planted firmly in a republic that stands by the rule of the people. However, for a country that fought a war to get free of the British monarchy, Americans are strangely fascinated by the royal family across the pond.

No more so than right now, with the passing of Queen Elizabeth II. Many of us don’t remember a time when she didn’t lead Britain. And some of us remember when the “sun didn’t set on the British Empire.” Britain had colonies and territories all over the world.

When I was growing up, Prince Charles and Princess Anne were often featured in My Weekly Reader, the grade school window to the world’s news. Charles is a year older than me, and Anne a year younger. See Charles ride a pony wearing his fancy riding outfit? Did Anne wear the same kind of uniform as we did when she became a Brownie Scout? We knew about it.

I confess to being part of the curious crowd of royalty watchers. My husband and I watched all six seasons of Downton Abbey. This series was about the British aristocratic family, the Crawleys and their domestic servants, during the early 20th century. They lived almost at the top of the social pecking order.

The series helped us realize why they needed so many servants. Who else would manage those extensive wardrobes prior to washers and dryers? And how would they ever prepare a formal dinner for twenty every single day without refrigeration or microwaves?

Why are we so interested in people who have been elevated above us? Perhaps we find it amusing that they aren’t so different than us.

Queen Elizabeth began her reign in 1952 and was on the throne for seventy years.

She accepted her privileged position and responsibilities with the grace of…royalty.

It should be noted that preferred her ever- resent hats and purses to her royal crown. Maybe that was because crowns, with all of their gold and jewels, are darned heavy. Or perhaps it was because she was aware of a kingdom higher than hers.

At the end of her life, the queen regretted that she wouldn’t live long enough to see Jesus return, because she wanted to lay her own crown at his feet. How good it be if all world leaders would humbly acknowledge that there is a higher power that sees the affairs of mankind and balances justice and mercy.

Years ago when I went on a tour of Scotland with my cousins, we visited the Palace of Holyrood House in Edinburgh. Although Scotland has many castles, this one stands out because it’s the official residence of the British royal family when they are in Scotland. Note: the queen chose to spend her last days at Balmoral Castle in the north part of Scotland.

Our guide at Holyrood House pointed upward to a flag that waved in the breeze. When a member of the royal family is in residence, the usual flag is lowered and a special flag is raised. The people of Edinburgh keep an eye on the flag over the castle. A visit from royalty was always big news, a source of excitement.

As we stood waiting for the tour to begin, a song popped into my head. “Joy is the flag flown high from the castle of my heart…when the King is in residence there.” I’d learned the song in prayer meetings during the 1970s.

Although it was a short chorus by an anonymous author, it became widely known during the days of the Charismatic Renewal. We sang it with abandon, waving a hand high like a flag. “So let it fly in the sky, let the whole world know that the king is in residence there.”

Standing there in Edinburgh looking at the flag over Holyrood House, I had an aha moment. The author of that Christian song surely was inspired by the British tradition of raising the flag in honor of royalty.

No royalty was present the day we were there. However, the whole flag incident gave me some insight into the ancient structure of the British kingdom. This custom of the flag brought order, communication and a sense of community in an unassuming British way.

I turned away from the palace and took in the scene around me. Tourists posed for photos and gawked at buildings. Car horns honked. People in business suits walked purposefully between appointments. Children wearing uniforms walked home from school. 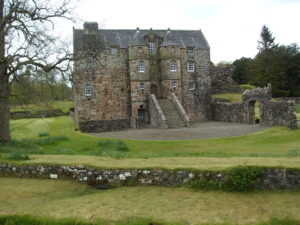 Rowallan Castle, one of many in Scotland

Unlike the gawking tourists, the Scottish people didn’t seem particularly aware of the royal residence, and went about their lives oblivious. Their heritage as members of the history, purpose and character of the British empire were unseen by them. You might say their royal heritage was hidden in plain sight.

The kingdom of God is like that. We participate in the natural world, often unaware that there is a supernatural, spiritual kingdom that governs our universe. We are unaware of our honored heritage, or our rights and responsibilities as member of this kingdom. They are hidden from us in plain sight.

Apparently, from her high position, Queen Elizabeth II was able to grasp her important place in this world and yet was aware of a greater kingdom that rules over all.