Signup for news and special offers!

The Rich Life of an Author 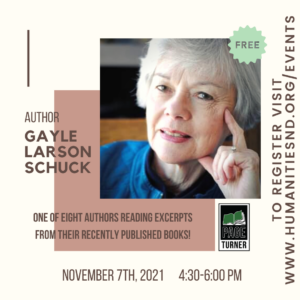 The Rich Life of an Author

Some people may think an author’s life is all glamour. That’s because they haven’t seen the author doing back stretches after sitting at the computer all day or lugging her books into a venue to sell. Another delusion is that publishing a book makes a person rich. I’m still waiting for that ship to come in.

Meanwhile, I am rich in wonderful experiences. Let me share what happened one afternoon last month when I spoke at a local assisted living and basic care home.

I was warned in advance that the audience wasn’t likely to buy any books, so instead of talking about my new book, Cottonwood Dreams, I told them about writing Secrets of the Dark Closet. Since Secrets was published four years ago, I’ve learned that the topic has universal appeal. Apparently, every family has its secrets. 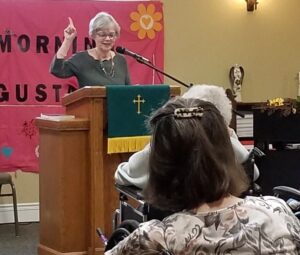 After putting in a fair amount of time preparing the talk, I drove a few blocks to the home. Once there, I was dismayed to see most of the audience was in wheelchairs and several were asleep!

“It takes a moment to judge someone, but a lifetime to understand them.” – Tina Ng

Soon after I began, it became clear that looks were deceiving. Several people smiled or nodded as I talked. When I asked questions, they were eager to share stories. A young fellow sitting in a wheelchair at the back of the room took photos for me.

One woman was so bent over, her head was almost on her lap and one leg was all wrapped up. From time to time, she would raise up and nod at me. That tugged at my heart strings! Later, I sat with her and learned she’s in her late 90s. We had a rich conversation about family secrets and the times we live in.

When I was about to leave, there was a ruckus in the hall. After the talk, one lady had wheeled her chair through the building, taken the elevator to her room, and was dashing back. I heard her call out, “Is she still here? Can I still buy a book?” That was my one sale for the day, and though it was only $12, it was priceless.

Here’s another story. I went to the KNDR-FM studio to do a live radio interview mid-September. At 8 a.m. I usually haven’t muttered the word “coffee” by that time. Sigh. 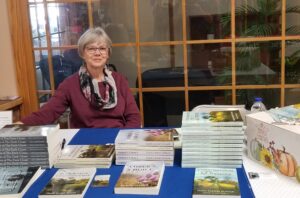 Three days later at the Northbrook Mall Vendor Show, I learned the “sacrifice” was worth it. The first person who stopped by my table had heard the interview. She’d driven over 60 miles and arrived as the doors opened. The second person was also from out of town. She stopped by to say thank you because she’d won the book giveaway on KNDR.

Later, another woman expressed a curious interest in the Prairie Pastor Series, and then she really surprised me. She’d read the first two books and she guessed the name of the little country church on which Cottonwood Church is modeled. That delighted me, and even more so after learning that she grew up attending that church.

Lately, these wonderful encounters have been happening almost every week, and this author is feeling rich indeed.

or even touched – they must be felt with the heart.” Helen Keller

November 7: I am privileged to be one of eight authors featured in the Humanities North Dakota Page Turner event. On Nov. 7, you are invited to watch me read a chapter from Cottonwood Dreams. The segment will air from 4 to 5:30 Central Time at https://www.humanitiesnd.org/event-details/nov-7-page-turner-1. There is no cost.