I’m of the Old School 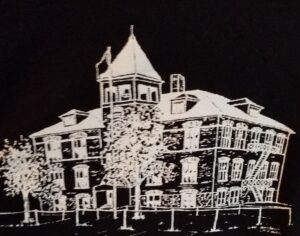 Perhaps I’m old school because I attended the Old School when I was growing up. It was a square brick building with a bell tower and three floors. The wooden stair steps had indents from decades of young feet tramping up and down them. Each fall the newly shined hardwood floors smelled like polish.

I lived across the street, and so the school grounds were my playground. On summer nights, the neighbor kids played baseball there. On mild days, we used the iron bar fence along State Highway 13 as a balance beam. I still remember rambling across the snow-crusted schoolyard with the boy next door after a school dance.

In the main hall of the school, a statue of Abraham Lincoln greeted students as they came up the steps. To a little kid from a small town, the statue was large in meaning. 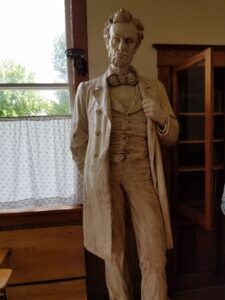 Old Abe in his new home

Old Abe reminded me that even a poor boy from the frontier could grow up to be president. He was known for his honesty. He was a champion of freedom.

Some people appear to be ignorant of Lincoln’s accomplishments and sacrifice for us, U.S. They desecrate and tear down statues of Lincoln. They point out his flaws and miss the obvious fact that he changed history for the good of all of us.

To me, the statue will always be linked with the ideals that were instilled in us as students. This month, President’s Day falls a few days after Lincoln’s birthday. It’s a great time to think of how much he helped our nation. Yes, we have our problems. Still, people all over the world dream of moving here. That’s because of, not in spite of, the leadership of people like Abraham Lincoln.

Lincoln delivered the Gettysburg Address on the battlefield during the Civil War. That battle was the turning point in the war for freedom from slavery. 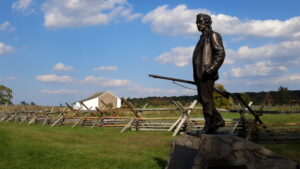 The Gettysburg Address still identifies the heart of America. Please take a moment to read through its 278 words which are still relevant today.

Four score and seven years ago our fathers brought forth on this continent, a new nation, conceived in Liberty, and dedicated to the proposition that all men are created equal.

Now we are engaged in a great civil war, testing whether that nation, or any nation so conceived and so dedicated, can long endure. We are met on a great battle-field of that war. We have come to dedicate a portion of that field, as a final resting place for those who here gave their lives that that nation might live. It is altogether fitting and proper that we should do this.

But, in a larger sense, we can not dedicate — we can not consecrate — we can not hallow — this ground. The brave men, living and dead, who struggled here, have consecrated it, far above our poor power to add or detract. The world will little note, nor long remember what we say here, but it can never forget what they did here. It is for us the living, rather, to be dedicated here to the unfinished work which they who fought here have thus far so nobly advanced. It is rather for us to be here dedicated to the great task remaining before us — that from these honored dead we take increased devotion to that cause for which they gave the last full measure of devotion — that we here highly resolve that these dead shall not have died in vain — that this nation, under God, shall have a new birth of freedom — and that government of the people, by the people, for the people, shall not perish from the earth.

The Lincoln statue from the Old School is now located at the LaMoure County Memorial Museum at Grand Rapids, N.D. You can find the link to the museum on Facebook.

I’m editing the manuscript of Cottonwood Dreams and wishing I could make a road trip to Cottonwood Creek. I’d stay at Kate’s Bed & Breakfast and gas up at Your Friendly Co-op. Then I’d drive out to Cottonwood Church and snap a few photos.

Speaking of which, I am looking for good photos of a North Dakota blue sky over a sunflower field. If you know of any, please contact me.

“Some old-fashioned things like fresh air and sunshine are hard to beat.”